Learn how to create and vote for a governance proposal via the polkadot.js app 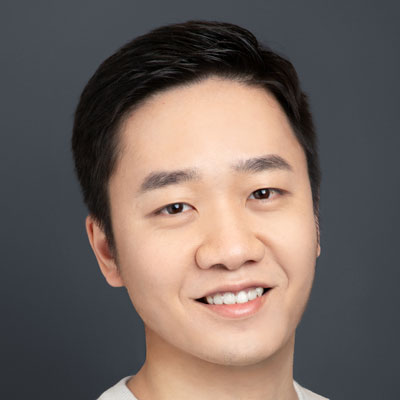 Normal proposals require endorsers (some people stake tokens to support) to decide which proposals can be voted on in the next round of referendums.

Usually, Only one proposal will be voted on per round of referenda.

The council can propose an external proposal, Then this external will have priority in the next round of referendums.

There may be more than two referendum if the technical committee uses the “Fast track” to urgently process an external proposal. 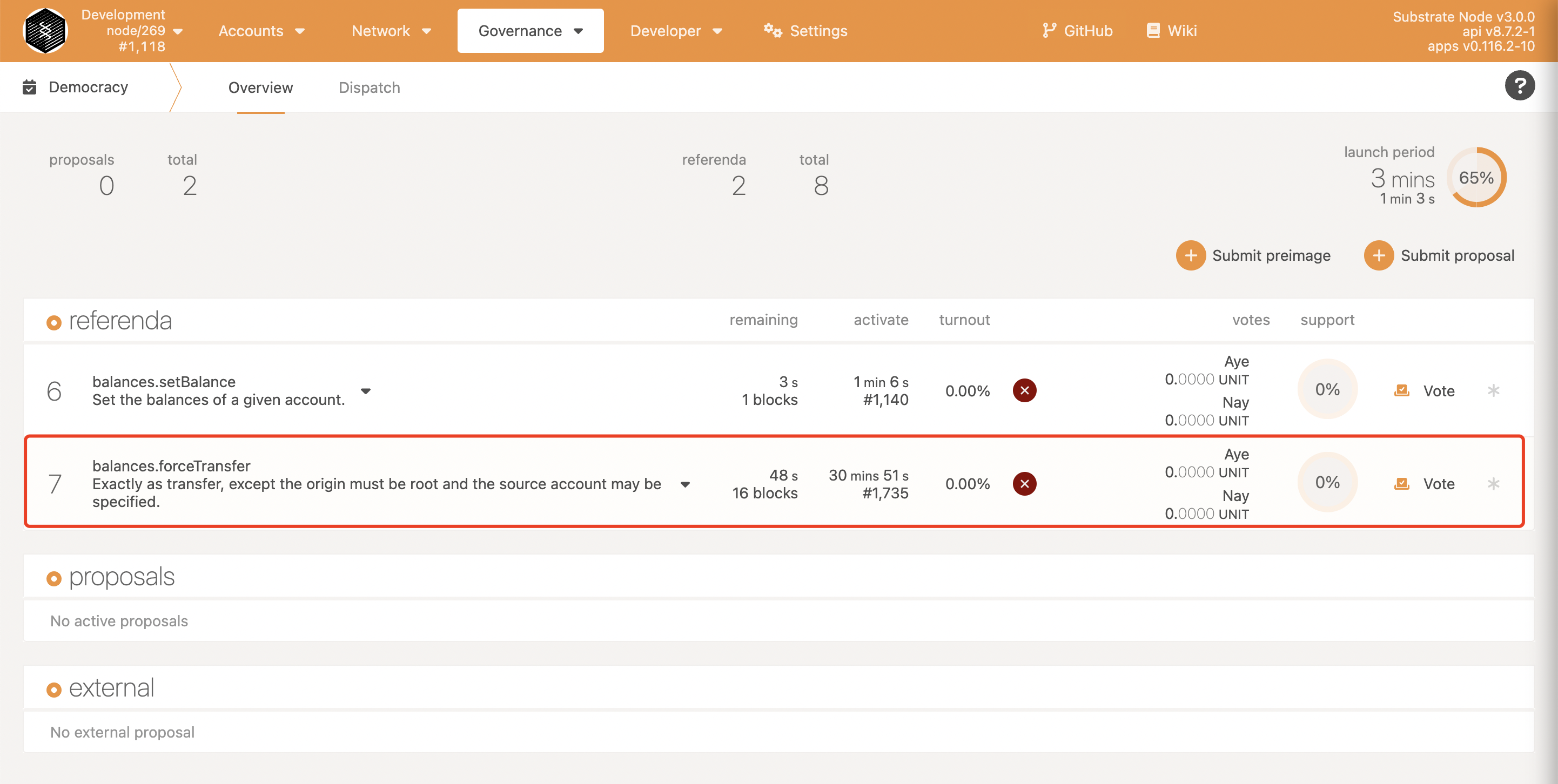 How to upgrade runtime through governance?

Take the external proposal as an example.

1. Compile the new version of the compressed wasm file

It usually ends with .compact.compressed.wasm.

Preimage is the content of a proposal that contains all the parameters of an extrinsic.

Anyone can submit the preimage.

Be sure to record the preimage hash before submitting.

Use the council member’s account to submit an external proposal.

Council members can vote on it. If the threshold is reached before the voting period ends, after clicking close button, the proposal will be moved to a external proposal list in democracy page. 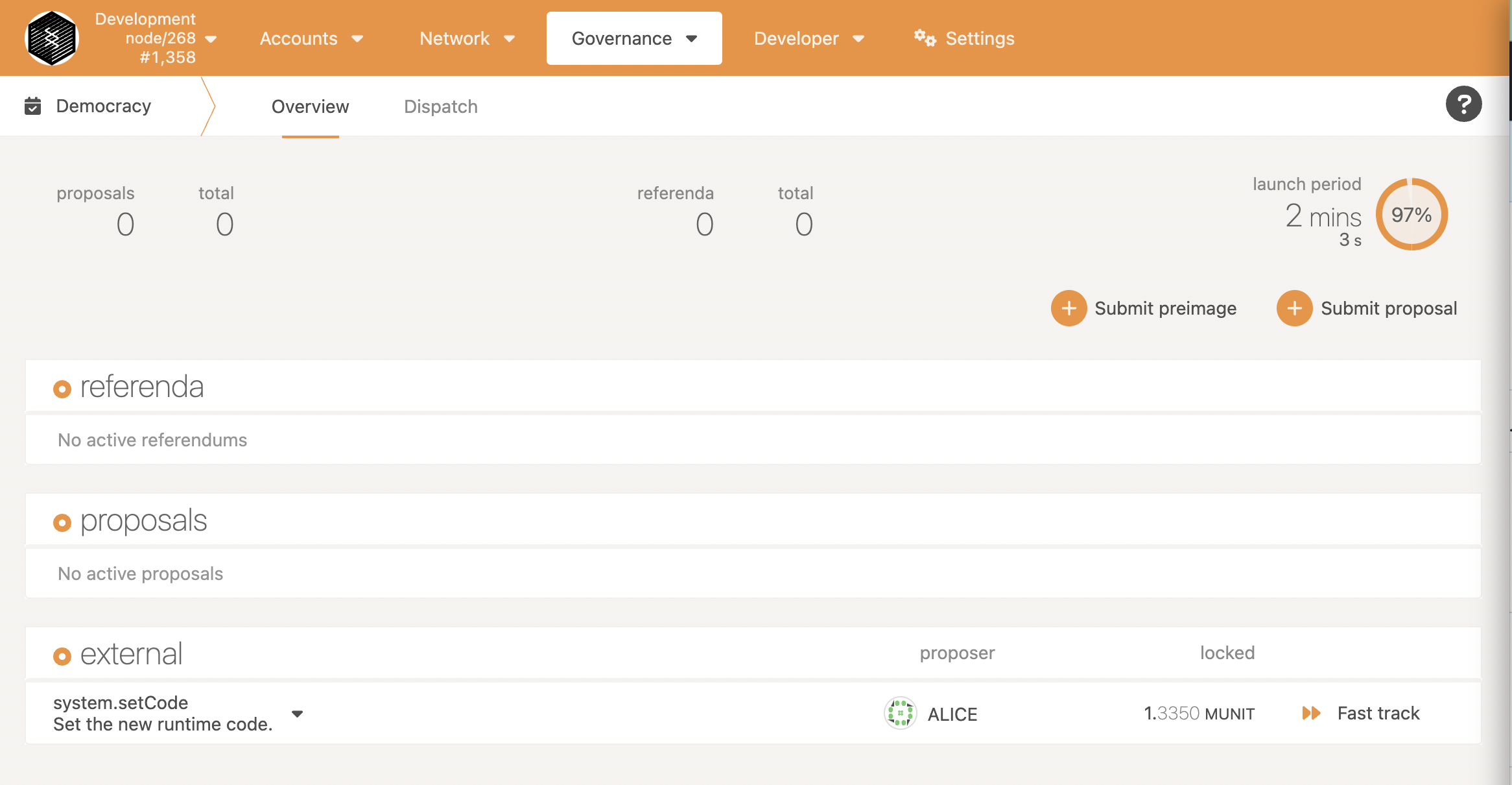 We need to wait for the start of a new round of referenda, this proposal will go to referendum.

LaunchPeriod is in the upper right corner of the image. It is the duration of each round of referenda, it is 7 days in Turing.

Users can vote during the voting period after the new round of referenda begins. VotingPeriod is 7 days in Turing.

Similar steps as above：

3. If the external proposal needs urgent processing, the technical committee can use the “fast track” to process it.

5. When the voting period ends, the vote will be executed at the end of the enactment period.

The outcome of the referendum

There are 3 ways to win or lose a referendum:

When all members of the council agree on a proposal, it can be moved to a referendum.

when the turnout rate is low, a super-majority is required to reject the proposal, which means a lower threshold of “aye” votes have to be reached

When agreement from only a simple majority of council members occurs, the referendum can also be voted upon.

Polkadot utilizes an idea called Voluntary Locking that allows token holders to increase their voting power by declaring how long they are willing to lock up their tokens, hence, the number of votes for each token holder will be calculated by the following formula:

The conviction multiplier increases the vote multiplier by one every time the number of lock periods double.

Only the winning voter’s tokens are locked.

Questions like how to count votes are very important and there are many ways to count votes, so please read the official article carefully.